A Day With Shopify 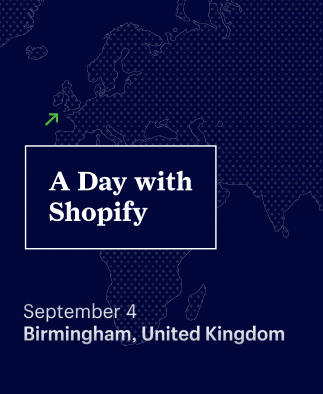 On Monday September 4th I was delighted to attend the 2nd “Day with Shopify” in Birmingham, conveniently located at Birmingham Library just a 5 minute walk from our Head Offices.

It is an ambitious series of events spanning the globe, next in New York, then Canada, onto Bangalore before finishing in Melbourne in November later this year. After the day you can see why, they’re a fiercely ambitious Company with the swagger to match and having played around with their product for the last 12 months, I think it’s fair to say they have the product to match too.

The first thing to strike you is the friendliness of the Shopify community, you can tell this comes straight from the top of the Company and filters down through its staff and into the strategic partners, everyone wants to help each other out. There is a joint feeling of optimism through the network and that knowledge shared as a collective will be to the benefit of the whole Shopify ecosystem.

Shopify started as an idea back in 2004 amongst some frustrated snowboarders, trying to get their own online store online. They eventually solved the problem themselves and launched the Shopify product in 2006, the growth since is extraordinary.

This Google Trends chart shows backs up the impressive numbers powering Shopify’s growth with the merchant count tripling over the last 5 years to over 500,000.

There were a number of good speakers on the day, covering a wide range of topics all of whom with an engaging personal story on how Shopify has helped fuel their entrepreneurial ambition.

The day kicked off with a keynote speech from Brandon Chu, Director of Product development at Shopify. It was a great speech, charting his early career as a professional poker his failed but valiant attempt to disrupt the amateur live music business and his eventual step into Shopify 2 years ago.

Almost carbon-cut from the ‘silicon valley, ivy-league educated’ guy you might imagine, Brandon was extremely impressive as a presenter and even more so when talking about his plans for the Shopify product into the years ahead. The future of the platform seems in safe hands.

One of the best features of the day was the availability of ‘Office hours’. These would run concurrently to the main talks and offer you the chance to book 15 mins with Shopify specialists and the presenters of the day. An excellent concept and ensures you get the most out of the day, giving you this crucial one on one time to probe away to any issues specific to you.

Shopify feels like it’s the right technology at the right time for the ecommerce industry. Nearly 20 years of growth on expensive, slow-moving and clunky platforms has left many merchants desperately looking for a more cost-effective nimble solution and ready to make the switch.

Check out the chart below.

This is the earlier Google trends graph charting the demand in searches for Shopify but now overlaid with those for Magento. The change in the last 12 months is stark, with Shopify moving ahead for the first time with the rather stale demand for Magento beginning to tale off.

This is surely a sign of things to come and Shopify is well positioned to take advantage of legacy mid-level solutions like Magento as well as the next generation of basement start-ups looking to quickly get online and scale their ideas.

Start your Shopify journey today by speaking with a Shopify Partner